When we arrived to base camp we went to the spanish group, to let them know Luis was alive, and see if they could organize the helicopter for that same morning.
The next hours were frenetic for us, going frombase camp to base camp to check what could be done. John, a canadian guide, immediately ofered his help, and ofered about 6 botles of oxigen that were in C2, in case they would be needed.
The spanish group (with their agency), organized the helicopter that because of the bad weather never came.
So, that morning and that day, nothing else happened except movement on base camp. Nobody went up to C1, but the members of Altitude Junkies stayed there monitorising the situation.
That day it snowed and the visibility to the upper part of GII was zero. The clouds only allowed a short view to the mountain somewhere in the afternoon, and by that time there was no sign of Luis. On the spot he was last seen the night before, it was only snow. Could he be covered by the snow?Could he get down to C4? C3?
Until today, there is no answers.
The day that followed also snowed, and the clouds prevented the helicopter to come, one more time.
It was not posible to go higher than C1 because of the danger of avalanche, so after that second day, the members of Altitude Junkies came down to base camp.
There was no hope anymore.
At the present moment only Jacek Teler could clarify some aspects about what happened to Luis. But Jacek still did not arrive at base camp, as he stayed a few days in C1 and went directly to try GI, where he still is.

Our thoughts and opinions about Luis disapearance:

(We apologize to iranian team, to always use the term "iranian members", but we don't know their names. Not all members were involved in the subjects mentioned in the following text, and also the last post)
(The picture attached is refered to the last post. Arian and Michel, from Altitude Junkies , in C1, with one of the bags of garbage left by some iranians in a crevasse)
GASHER-REFLECTIONS
23-07
I'm sitting in my base camp tent looking at the clouds that prevent the rescue helicopter to come. My feelings are mixed, sadness, anger, melancoly...I wonder if the title of this post is the right one. It crossed my mind "8000 - the egoism number", "8000 fever", "8000 lies"...
The GASHERDREAMS is now something that belongs to the past, that stays in my heart as a memory of an unfinished reality, a reality that can never come true in a mountain with more than 8000m, and a "normal route", a climbing route that for some, is the route of selfishness.
On the 21 of July me and Paulo crossed again the glaciar separating base camp from C1. The rumors of a good weather window coming on the 24 and 25, made us believe that we still had a chance.
This time we were heading for the "normal route" of GII. We gave up the idea to climb the "French Spur" because the snow has accumulated on GII in such a way, that we don't think it's possible for 2 persons to break trail on the upper, less steep, part of this route.
After our attempt on GVI, this one also looks as a remote possibilitie. So, the only thing we felt we had left, although it was not our aim, was to go for the "normal route" on GII.
At about 11:00 a.m. We arrived inC1 feeling good, decided to give GII a try. The night before, I could barely sleep, the anxiaty keept me awake. While arriving, we recognized a lot of climbers were descending from C3.
The word was that the day before, some iranian climbers had summited GII in a day of strong winds at altitude. Beside the iranians, up there was also a polish climber, Jacek Teler, and a spanish, Luis Barbero, this one a friend of ours. Luis dream was to summit GII, no matter how, and it was his second year attempting to climb it.
As time went by in the afternoon, the members of iranian team started to arrive to C1, some of them happy for getting the summit (later we knew that they were close to it, but never made it).
After maybe one hour, curious and worried, me and Paulo decided to ask to some iranian members if they knew something about Jacek and Luis. We were worried about Luis, because we knew the "8000 fever" was consuming him since the beginning.
About Jacek, iranians said he was coming down. About Luis... Luis was missing since the "summit day". We found it strange that until we asked, nobody made any coment about Luis, that he disapeared. As our questions about what happened started to pop up, the members of the iranian team to whom we were talking, started to talk about what happened in the day before.
Tomorrow (25-07) we'll go to C1 to pick up all our gear. After all that happened, we are feeling sad, and we don't have any motivation to climb GII.
If we fell ok, and if weather helps, maybe we'll give another try to GVI, this time from the face that stands right in front of base camp (south face)
Daniela/Paulo 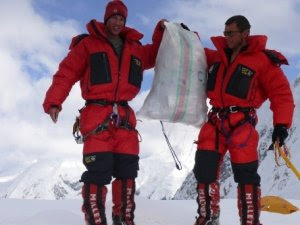 Arian and Michael with one of the garbage bags.

De novo no campo base - back to base camp.

This one and probably the next posts will be in english, because we think it's importante that our message gets to more people. Again, we are in base camp, result of a combination of... a tragic happening and bad weather.
Again, there were some attempts to summit GII, by an iranian mountain federation team, one polish man, and one spanish. One more time, nobody got to the real top of the mountain, the highest point from where one can only go down. Still, the iranian team was celebrating the summiting of some members!
How do we know it?
As a result of a truly sad happening, of witch we'll write about on days to come, and because some members of the iranian team told us (and some other people in BC). Aparently they stopped about 50m from the summit, as the summit ridge was sharp and dangerous, and they did not have enough rope to fix and procced to the summit safely.
Still, they deserve congratulations for getting so close in a very windy day.
BUT we also want to congratulate the members of Altitude Junkies for their great attitude: in camp 1, some members of that same iranian team, fixed a rope to acced a crevasse and through inside 2 huge bags of garbage, in front of Altitude Junkies members.
Imidiately, there was an argument about it! 2 days after (today: July, 23) the members of Altitude Junkies went inside the crevasse, recovered the garbage bags, brought them to base camp and emptied them just in front of the iranians mess tent, in silence. The bags contained gas canisters, plastics, all kind of garbage!
Congratulation guys!

About the tragic happening, we'll write soon, when we feel the moment is right.

About what we shall do...at this moment we realy don't know. The weather is unstable, snowing,and again GII is full of snow, dangerous from C2 up. A second possible line on GVI, is also impossible to try at the moment, because of the danger of avalanches.Also, right now, because of the tragic happening, our mind is not absolutely focus on the montains. 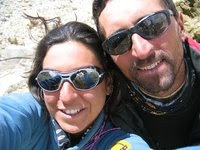 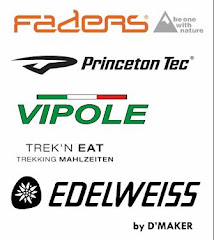